Dr. Ashley Ross is a nationally recognized expert in prostate cancer. He previously worked as the head of the Urology Prostate Cancer Program at John Hopkins. He was also an associate professor of urology. Currently, he performs MRI-fusion biopsies for Texas Urology Specialists. However, he quickly realized there was a problem with MRI-fusion biopsies that needed solving. Read more to find out how Lumea technology improves prostate biopsies in his practice.

What is an MRI-Fusion Biopsy?

MRI-Fusion is the latest technology available in targeting suspicious lesions in the prostate. Fusion MRI is an MRI of a patient’s prostate to detect areas of interest to biopsy combined with an overlay (or fusion) of an ultrasound to guide the urologist to those areas of interest. It ultimately maps out where each biopsy is to provide the ability for more targeted treatments.

The Problem: The Loss of Tissue Orientation

Although MRI-fusion biopsies are a major advancement in urology, Dr. Ross saw a significant issue. “Traditionally, when we biopsy a lesion, we place the tissue into a bottle full of a preservative called formalin to fix it.” He explained, “The tissues free float in the bottles, so we lose track of which end of the tissue is which.” Tissue orientation is where the proximal and distal (near and far) ends of the tissue are in relationship to the biopsied organ. The inability to preserve orientation means that a physician cannot accurately map a fusion MRI-biospy, flawing potential treatment plans.

For example, if a core biopsy was partly from a detected lesion and partly from tissue surrounding it, and a certain percentage of that tissue was diagnosed positive for cancer, there is no way of knowing if the cancerous tissue is in the lesion. A physician can only have a general idea of the cancer’s location. However, with preserved orientation, doctors can know exactly where cancer is located. They can know if the lesion on the organ is over or underrepresented on the MRI. This means the physician can prescribe more targeted treatment. “Preserving tissue orientation is critical for us to understand the cancer within the prostate and perform treatment planning,” Dr. Ross said.

In order to improve tissue orientation, Dr. Ross decided to use a new biopsy collection device by Lumea called the BxBoard. The BxBoard stores up to 6 needle-core biopsies in site-specific lanes. A physician places tissue onto a formalin-soaked sponge within narrow lanes. These lanes significantly restrict tissue movement during its transit to a lab. This preserves tissue orientation. “Tissue is placed sequentially in the BxBoard, so I know both exactly where the cores came from and the orientation of each core,” said Dr. Ross. “Using this simple technique, we can get a better assessment of where the cancer is in the prostate. This helps us for treatment planning and better treatment decision-making for my patients.” 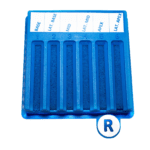 Lumea has provided other solutions for Dr. Ross and Texas Urology Specialists. Some of these solutions include the production of high-density scans of slides to allow digital access to tissue, the use of artificial intelligence to measure tissue surface area for more accurate involvement percentages, reduced turn-around time, and improved quality of tissue.

“Lumea is forward thinking. They look at the entire process from beginning to end to make the best diagnosis possible for each patient,” said Ross.

Lumea also provides clinics software that digitizes their workflows, removes the need for faxing, integrates with molecular testing companies to reduce turn-around times, allows for aggregation of biopsy results, and electronically notifies clinics as soon as a diagnosis is complete.

When asked how Lumea has helped his practice, Dr. Ross said “The Lumea platform has helped us in many ways. Some benefits are just logistic. Others are actually advancing the technology to allow for better diagnosis. All of them are important because they translate to a better diagnosis, faster turn-around time, better communication with providers, and improved patient care.” Request a demo to learn more about how Lumea can improve prostate biopsies and more for your practice.

*BxLink has not been approved by the FDA for digital primary diagnosis. Refer to CAP guidelines regarding the use of digital pathology technologies.